This week we're talking with Ziggy Blumenthal, artist on the Will Swyer penned THE MUGGING, the 4th installment of SECRET PROJECT. But not only did Ziggy contribute to the anthology but also played a key role in the production of the comic. Check out the interview below and don't forget to check www.secretprojectcomic.com on Monday February 22nd!
=============================
Mary E. Brickthrower: How long have you been reading comics?
Ziggy Blumenthal: Give or take about 20 years now. The first comic I really collected was POWER PACK. Between the ages of 11 and 13 my biggest goal was to get every issue and every appearance of the team (mission accomplished, by the way). Other than that I was really into AMAZING SPIDER-MAN,

NEW WARRIORS, ROBIN and I got every issue of the BILL & TED comic by Evan Dorkin. It wasn't until the comic store opened down the street from me when I was 13 that I really branched out, thanks to the recommendations of the owner. SIN CITY, WATC
HMEN, Miller's DAREDEVIL run, the early Jim Shooter / Barry Windsor Smith Valiant books and of course I continued to get everything I could by Evan Dorkin (or as I called him back then, The BILL & TED Guy).
MEB: When did you decide to become an creator?
ZB: It was really all I ever wanted to do. My motivation and how serious I took the thought went up and down over the years, but if asked the question I don't think i ever had a different answer. Looking back, I wish I took the thought more seriously more constantly back when I was 13 and throughout high school. I never really stopped drawing but there were definite misses opportunities in getting some good training early on. The aforementioned comic store that opened down the street from me was owned by Amanda Conner with her husband at the time. She's certainly helped me out and shown me a thing or two, but with a little more motivation on my part what an opportunity for a high quality mentor there. I really didn't know what I was missing.
In addition to that, with my family in the printing business I had the chance, and the intention, of trying the whole self publishing thing while still in high school. It would've been nice to have learned all those lessons so early on. But unfortunately, while I started many projects, I didn't have the discipline to finish them. On the bright side looking back at them they were all atrocious and we should all be thankful they never saw the light of day, but it would've been nice to get the experience.
It wasn't till I was 21 and working in a warehouse that I really decided to take making comics seriously and enrolled in the Savannah College of Art and Design's sequential art program. Now all I need is a genius idea I can make one issue of then sell to Hollywood, cause let me tell you, those student loans aren't gonna pay themselves!
MEB: How did you become involved with SECRET PROJECT?
ZB: I'll give the short version for those who didn't read Tommie's interview (Hey! Go read Tommie's interview!). Out on the town with Sean McManus and Tommie Kelly. In an Irish pub, showing the two of them how much more Irish I am than them both put together. Tommie mentions with all great talent on the Oeming board that we should all do an anthology. Everyone agrees, a legend is born. From there, with my experience self publishing, I decided to join Mary and Sean on the editorial side of things and help how I can putting the book together.
As for the birth of my story with Will, that was a case of us both being lucky enough to have bad luck at the same time. I originally paired with another writer and he originally teamed with Scotty Law to draw THE MUGGING. At the same time my writer and Scotty both had to drop out, so I was more than happy to pick up Will's story. Scotty did do layouts before having to drop out, so wanting as many people from the board involved in the book as possible I chose do my finished pencils off of Scotty's layouts.
The most interesting part of working on this story for me was it's the first thing I've drawn that I didn't ink myself. Tom Shloendorn did a fantastic job making my chicken scratch look good, but I definitely learned a few lessons about collaborative drawing. One of the reasons i decided to graytone the story was after getting the inked pages back I felt the pages looked too white. For a story that took place in an alley at night there was definitely not enough shadow work in it, and I realized it was completely my fault. The shortcuts I take penciling when I do my own inking aren't gonna fly when someone else is finishing the pages. Tom can't read my mind, and I know to pay attention to just how finished the pencils are before I send them out to someone to ink.

MEB: What else are you working on right now?
ZB: My main project is my weekly web comic, Chris Wnuk: Secret Jew, about a man who for reason not yet explained has to keep the fact that he's Jewish a secret. He goes out of his way to throw people off his Jewish scent while still adhering to his religious guidelines as best he can. Well, most guidelines. There's one pretty important Commandment that he's seemed to have missed. Let's just say it's in your best interests to NOT figure out he's Jewish.
Then there's my print comic, Sidekicked!/Operation Pajama Pants, with writer Cory Harris. What started as two separate comics has now been combined into a single flip-book (old Marvel Comics Presents style). The latest issue was released at the Baltimore Comic-Con, and we're making the con rounds with that. And as soon as I find a new apartment and get all my drawing equipment out of storage we'll be starting on the next issue. Anything you ever wanted to know about any of this can be found at fakemccoy.com
MEB: Thanks Zig!
======================
SECRET PROJECT has a fan page now on Facebook, check us out below!
Secret Project Comic

Promote your Page too
Posted by Mary E. Brickthrower at 12:25 PM No comments:

SECRET PROJECT #3 - The Power of Negative Thinking + Catching up with Attila...

This week we'll talk with artist Pat Loika and letterer Thomas Mauer of THE POWER OF NEGATIVE THINKING, the 3rd installment of SECRET PROJECT. TPONT will premiere on www.secretprojectcomic.com on Monday February 8th !
==========================

MARY E BRICKTHROWER: How long have you been reading comics?
PAT LOIKA: I've been into comics for about 20 years, and Transformers and GI Joe were my gateway books.

THOMAS MAUER: While I read comics as a kid, there were long stretches in my teens and early 20s where I didn't even think about print comics. Web comics was where it was at and I followed tons of them.

It was around 2002 and Marvel's silent issue month that I started getting interested in the print medium again. Mainly, I read Star Wars comics though. It wasn't until 2004 that I started reading comics in earnest, not discriminating between genres. There are so many good stories out there, I couldn't imagine limiting myself to just one type of genre or storytelling.


MEB: Conversely, when did you decide to become an artist / creator?
TM: Toward the end of 2004, I had a few ideas for short stories and approached Noble Larimer and Ronin Studios about them. This led to editing a short World War II anthology. I couldn't find a letterer for my own stories and decided to give it a try. Lettering turned out to be fun, and shortly after Rich Johnston and X-Force's Chris Yost approached me about lettering their respective comics. It was a great challenge to improve my skills, and since they offered to pay me, you can blame them for leading me down the dark path of comic creation.

PL: I've always been into drawing, even before I discovered comics. I think I was 15 when I realized that I'd really, really love to draw comics...regardless of the pay.


MEB: How did you become involved with SECRET PROJECT?
PL: I frequented Mike Oeming's board, and I saw the open invitation to submit entries for Secret Project, and signed up. I paired up with writer Thommy Melanson and we worked on our story.

TM: Thommy and I have been working on short stories since 2005, so when he asked if I'd letter his story (drawn by Pat to boot--one of my favorite people in comics), I was on board.


MEB: What else are you working on right now?
TM: Right now I'm working on the web comics http://www.contropussy.com and http://wwww.g 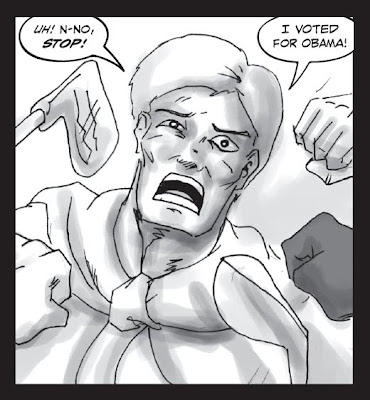 Stuff that's already in stores includes Oni Press' LOVE BUZZ by Len Wallace, Dark Horse's RAPTURE by Mike Oeming and Taki Soma (the trade collection is in stores soon), Image's KILLER OF DEMONS by Chris Yost and Scott Wegener, all volumes of the POPGUN anthology (volume 4 is in stores February 24, 2010), STARSHIP TROOPERS, THE BOY WHO MADE SILENCE, and tons more.

PL: I just finished up a 112 page graphic novel with writer Adam Witt. It's called Blacklisted, and it will debut at the Emerald City Comicon in March. I'm working on finishing up the first storyarc of The Villain with writer Steve Earnhart, and I'm working on a few other short stories.


MB: Thanks guys ! Best of luck to both of you !
============================
Also I recently spoke with Attila Adorjany and caught up with him and what's he's been working on:
ATTILA: Hope all's well and the New Year is getting off to a good start! I've recently re-launched my website with several focused galleries.
Here is the link: http://www.600poundgorilla.com

In addition I've been working on a Graphic Novel that I am
posting on the web as I complete pages.