Cinco De Mayo proved to be quite festive for me ... but no margaritas were consumed. After more than a year of attempts, Goddard finally secured tickets for a live taping of THE COLBERT REPORT - which besides LOST and my recent obsession with FLIGHT OF THE CONCHORDS, is probably my most watched TV show. I was going to be in the same room with Stephen T. Colbert, and I wasn't sure how I was going to react.

I don't get that starstruck usually. I've met my fair share of celeb and pseudo-celeb. I've interviewed some of the most important comic book creators in the biz today. But when it comes to Colbert, all rules go out the window. All bets are off. You might call it a crush - but honestly it's just an absolute admiration to Colbert and his craft. He has taken the idea of "gravitas" to amazing new heights, has lampooned some of the biggest names in the political "right," and has also voiced one of the funniest cartoon characters that Cartoon Network's Adult Swim ever offered (Harvey Birdman's Phil Ken Sebben).

May I make an admission? I used to despise Colbert's character on The Daily Show. Thinking him far too pompous and not at all funny, when the news came that he would have his own show I would have to say that I was slightly annoyed. And to pronounce the "Colbert Report" with a silent "T"? UGH! I can't recall what finally did get me watching the show; I think hearing about his speech at the 2006 White House Correspondent's Dinner was the first inkling I had that maybe this bloke really did have some brass balls. Watching the show was soon to follow with his voice work on Harvey Birdman being the icing on the cake. Bespectacled, appearing as a staunch Republican to the point of shocking ludicrousness, and the ego the size of his home state of North Carolina was enough to count me as a fan. The man is easy on the eyes as well (it had to be said!).

The day came and Goddard and I headed into New York City around 1pm. We found a bar near the studio and had a couple drinks before heading over to the line. It wasn't an INSANE line, but people had been waiting for awhile, sitting on the canopied concrete ground reading and waiting patiently for the time we were allowed in. The staff was personable, I inquired about the guest but was only given the statement that we were "in for a treat." We were ushered into the holding area for bag checks and metal detectors. The wait was longer than an hour which only built up the anticipation to a crazed fever pitch in my head. The audience coordinator came out to announce that Colbert was re-writing some things after rehearsal and that this was a common occurrence for him. We were allowed to ask questions of the audience coordinator (A.C.) and learned some interesting tidbits - most importantly to me was that Colbert's middle name is Tyrone.

Finally the doors opened and we were led into the room where the "magic happens." We were given cards with numbers on them and this is the order in which we entered the studio. While on TV the set seemed on the larger side, the truth is the studio was teeny tiny and the audience was only 107 strong. A nice surprise as the intimacy level proved pretty damn high.

If you watch both the Daily Show as well as Colbert, you know that sometimes there is a "toss" from the Daily Show to Colbert where basically Jon Stewart and Stephen Colbert banter for a few seconds to segue from one show to the other. This is not done all the time (they're lucky if they do it twice a week we were told by the A.C.) but we were going to get to see one. This meant that before Colbert's Q&A with the audience, before the stand-up comic that would be "warming the crowd up," Colbert came out in all of his glory to record the toss since the Daily Show is filmed directly before they tape the ...Report. 2 bleachers on either side were divided by a "backstage" area that without warning, Colbert came bounding through. He ran around, slapping high fives to the people on the outside of the rows (we were on the inside...:sigh:) and this is where I STARTED CRYING. Yes, tears were shed as I sprang from my seat, screamed and clapped maniacally. I felt my throat constrict from all the yelling I was doing. I seriously felt that I was going to lose my voice.

The toss was interesting to watch b/c Stewart and Colbert talk live via satellite (they do not tape in the same building) for a few moments before recording...and Colbert is completely out of character. Only being in his presence for a few moments is all you need to sense that he is NOTHING like his TV persona but as soon as that camera went on and the stage manager relayed to Colbert that he was on, it was like a switch of truthiness was flicked and Colbert improved a tirade to Stewart in regards to them being "linked" publicly (referring to them as ColWart) and that it needed to stop. It was hilarious. It only lasted 5 minutes and he was gone again. We had a stand-up comedian that was pretty darn amusing "warm us up" but the damage was done and we were fired up with the taste we had just received.

Colbert came out for the 2nd time and answered a few questions. I was too embarrassed to utter or come up with anything so Goddard rose to ask him if Colbert was taking blame for how well the Philly sports teams were doing since he had visited our fair city. Colbert laughed (as not being in character meant that he was down to earth and not pompous at all) and said yes, he took full blame. He answered a few more questions and then we got down the business: the taping of the show.

Rock music such as The White Stripes blared between takes, Colbert mo 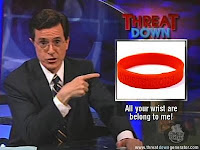 uthing the words and pointing to people in the crowd. He started shooting his trademark "wriststrong" rubber bracelets into the crowd and one headed straight out way. It bounced off Goddard's leg and I snatched it up before anyone had time to see it. This was as close as I got to the man - yes, he touched my "wristrong" bracelet and I resisted the urge to put it in a plastic bag and put it under my pillow. Instead it is proudly worn on my right hand with my other bands.

The show was hilarious. Colbert only flubbed once, in regards to the Korean pop star Rain that he has had an ongoing "feud" with that culminated in a pre-recorded sketch of him and Rain battling it out on a DANCE DANCE REVOLUTION video game console. The guest was author Carl Hiaasen, who took Colbert's jokes in stride. (I didn't necessarily feel that this was the "treat;" that rather the female intern was referring to the Rain appearance).

In half an hour it was all over but the feeling of elation lasted a good 24 hours afterwards. Colbert fed off the audience's intensity and I think that a good set of people were in for the show and rocked it hard for him. I highly recommend checking the web site once a week and attempting to get yourself to a taping. If you're in the NYC area you can do "stand-by" which we saw quite a few people make into the taping without tickets. Colbert may seem overrated to some but he is a funny and kind man that deserves all the hype. I may have to wait 6 months until I can go see him again...but I do plan on making it to another taping asap.

And now, you can check out the "Rain Dance-off" but what directly precedes that is a wave from Colbert to the audience, if you look below and to the right of Colbert's elbow - you can see me and Goddard, I have my hands raised high clapping - 2nd to last row. YAY! 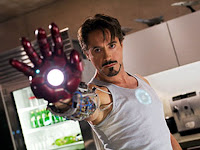 About 2 months ago I began whining every day or so. "I want to see IRON MAN. " It became a bit of a mantra for me as I have been enamored with Tony Stark since reading Mark Millar and Bryan Hitch's THE ULTIMATES. Warren Ellis' and Adi Granov's THE INVINCIBLE IRON MAN helped the love of the raven-haired, hard drinking,goateed millionaire even more. The trailers looked amazing and hearing the the movie was over 80 minutes was a good sign.

Ok, it's been 2 weeks and this movie has been touted as one of the best Super-hero films made. I'm going to have to agree. I'm not here to review something that you've probably already seen (and seen again). What I am here to tell you is this: I really really liked this movie. I think that it has the potential to be a better telling of the super-hero than BATMAN BEGINS. It may be a better film than THE DARK KNIGHT RETURNS but it's too early to tell. What can be said is that in its 2nd week it has successfully beat out the SPEED RACER debut. This is not a fluke. Robert Downey JR. is always an impressive actor but puts aside the fast mumble to personify the Tony Stark character; he is whip-smart, a ladies man, but also a man without a heart. Until he gets a metallic one with pretty blue lights. Another note - STAY THROUGH THE CREDITS. You ULTIMATES lovers will get a special treat that gives the promise of a sequel...and yet another Millar creation that will appear on the big screen much like WANTED. Congrats my Scottish Rogue! =)
================
Finally, if you haven't seen the trailer for MAY 30th's THE STRANGERS, check it out below. As a horror fanatic, I am wiggling with excitement and fear over this thriller that is supposedly "inspired by true events." I'll be in the theater opening night for this one. Make sure you save me a seat.