Zombie TV ... They've Got Their Visions Again Like It's Oxygen

Zombie’s all up in your TV grill !

Tis the season … for the living dead. Let me hip you to a couple great series that you should be checking out NOW or soon.

DEAD SET (IFC) – This British import premiered Monday at Midnight on IFC and runs consecutively at the Witching Hour (12am) all this week. The concept of this show combines your typical Zombie flick (outbreak, widespread panic and carnage...zombie and human alike) with that of the typical reality show -- in this case a fictional BIG BROTHER. As the o 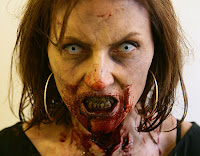 utside world is literally consumed by the undead, Kelly, a behind the scenes grunt on the show, survives long enough to make her way into the compound that houses the set and keeps the cast safe. They are unaware of the outside chaos but soon enough have to make tough decisions to outlast the zombies waiting just outside their gates.

This show is only 5 episodes (about 3 hours) so the pacing is on par with a movie rather than a TV show. But it is also shot wonderfully and the effects hold up. There are some cameos that only British Big Brother / sketch comedy watchers may realize (Bubble or Big Train anyone?) but nevertheless this is a great series worth checking out ! I'm keeping my fingers crossed that IFC shows this more than just this week !

THE WALKING DEAD (AMC) - This series premieres on Halloween at 10pm which does sound creepy enough but I hope they replay this bad boy because I know plenty of people that treat the 'ween like a major holiday and will no doubt be out partying. Set your Tivo kittlings ! I was blown away by the 1st episode, while it may share a common theme (ZOMBIES DUH!) with DEAD SET this series is in for the long haul. Based on the critically (and fanboy) acclaimed comic book by Robert Kirkman, Tony Moore and Charlie Adlard, THE WALKING DEAD is not set at a breakneck pace but instead balances the gore with a focus on human relationships and emotions. The main character is police officer Rick Grimes, whom enters a 28 DAYS LATER-like coma after being shot, only to awake to find the world in utter decay and disarray due to the zombie apocalypse. He is able to escape from the hospital and make his way back to the home he shared with his wife and son only to find it long since abandoned. Rick finds other humans along the way and learns that Atlanta was declared a safe haven before the world entered radio silence. Rick decides to make his way to Hot-lanta believing his family has fled there ... only to discover it's not so safe as he was lead to believe. 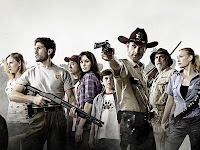 THE WALKING DEAD shares some similarities with DEAD SET apart from the obvious zombie-stricken plot. Neither series is driven by actors that you will readily recognize. Both series have decent effects, although I am sure that DEAD SET relied less on CGI and more on shaky-cam (but both work nevertheless). They also both have a main character that is dealing with some sort of family / relationship issue although I enjoy the fact that each shows character is on the opposite side of the spectrum when it comes to said relationship.

But from what I've seen of THE WALKING DEAD, this is where the similarities end. THE WALKING DEAD is planned as an ongoing series. Where DEAD SET is set at breakneck pace and contains mostly action, THE WALKING DEAD is really focused on the people whom have survived and the relationships they have both sacrificed and fought to keep alive. The scope of the outbreak is not really defined in DEAD SET, there just simply isn't the time allotted to do so. More background is provided with THE WALKING DEAD; we don't necessarily know the cause of the zombies but the fact that the outbreak is widespread and the symptoms / causes are outlined gives me more of a ZOMBIE SURVIVAL GUIDE / WORLD WAR Z feeling. There is a vastness and sense of endless possibilities that THE WALKING DEAD provides that DEAD SET does not.

Don't get me wrong, to miss either of these offerings is a travesty for any zombie lover, it simply proves that not every zombie tale is alike. You will not be disappointed in either show! Viva La Zombie ! < === bit of an oxymoron eh? =============================== Finally, because Halloween is an aforementioned major holiday for me, let me take you back to 1986 and a personal favorite of both mine and my sister Shacky. The movie: THE WORST WITCH starring Fairuza Balk (THE CRAFT) and Tim Curry (ROCKY HORROR PICTURE SHOW). The song: "Anything can happen on Halloween" sung by Tim Curry with amazing effects provided by Brian Harris and Tom McKerrow. Uh...I don't know who they are either but trust me, these effects are "special!". Feast your eyes on this...and I wish you a very Haunted Halloween!

Recent reviews by Mary B.
What's this?
Posted by Mary E. Brickthrower at 8:00 PM No comments: