Sampan 5 out of 5 stars~
Category: Asian Fusion
Neighborhood: Market East
5/8/2011
Despite a minor hiccup on the initial service (I also did join my party a few minutes after they were seated so I chalk up the delay to the server not realizing I had arrived yet), we really enjoyed Sampan.

We sat inside and it was open, modern and sleek looking. Loved the dark wood and the open kitchen. They have Asahi Super Dry on tap (a personal fave of mine). We shared between 3 of us:
-duck spring roll: flavorful
-crab won tons: good (but Latest Dish STILL has the best crab won tons in the city!)
-pork potstickers: very tasty
-General Tso's soup dumpling: OH. EM. GEE. This was awesome! Kinda like the french onion soup dumplings from Starr's Continentals but I have to say I liked Sampan's soup dumplings better. Such a neat idea and so yummy!

Each dish came with about 3 or 4 pieces, we were all fully satisfied after the meal. I can't wait to come back and try their happy hour deals! The outdoor Graphitti Bar in the back is also on the list to try!
===============


The Farmers' Cabinet - 2 out of 5 stars
Categories: Bars, Gastropubs
Neighborhood: Market East
5/6/2011
It really is interesting how people seem to LOVE this place or HATE it. Unfortunately I am on the negative side of spectrum.

I really wanted to like The Farmer's Cabinet as I read so many great twitter reviews prior to our visit. I did quite enjoy the food. We had the spare ribs and the rabbit two ways. Both were really good (except the slates they came out on were just plain silly!).

I hated the communal table we were seated at for dinner. The people that they sat next to us were so close they made the joke "Sorry we're late" to us as they sat down. There was a space 2 seats away that would've put some space between us but of course the hostess didn't put them there. It's just awkward!

I am not really a "beer person." I'm a lager or stella drinker. My boyfriend is a guinness or lager person. Boyfriend asked for lager after they advised they didn't have guinness, was told they didn't carry domestics. He tried to then just order a Jameson and ginger ale to which the reply was they didn't really have Jameson or any Irish whiskey, that they only really carried what was used to make their specialty cocktails. I picked something out for him but it was too hoppy (my fault!) for him and it took quite a while to get to him (I had my drink for quite a few minutes before he got his). The best part was we were joking about how they probably couldn't find the beer b/c they had some many varieties only to glance over at the bar to see 2 bartenders with flashlights looking at bottles. I did partake in the Walnut Street Shuffle cocktail made with St Germain (one of my fave liqueurs) and that was glorious! But I would say overpriced for the size.

So I would say go for the food and hope you get seated at one of the barrel tables!
==================
Gunners Run - 3 out of 5 stars
Category: American (New)
Neighborhood: Northern Liberties
3/21/2011
The menu on the Gunner's Run website has a lot more on it than what was available both times I went in this past weekend, but I say they're off to an ok start.

The 1st time we went in was the Friday before their grand opening, we had to wait quite a long time for a server to approach us once we were seated and my man-friend finally stopped someone and asked for a server. It was very busy.

Our lager cans took FOREVER, but the food came out pretty quickly. We had the chicken fried chicken and the Bad Luck Burger. The chicken friend chicken was super crispy and the sriracha mayo it's served with was totally tasty. I absolutely loved the Bad Luck Burger. It was so good, Craig N's suggestion that it is "an upscale version of a Big Mac" is the truth. This is not a bad thing at all. The fries were good but not great. The burger was worth the price of admission, a double cheeseburger for $9 is reasonable to me.

I was hoping to try the kobe corn dogs listed on their website's menu but sadly they didn't have them on the menu yet.

I really liked the HUGE map of Philadelphia they have on the back wall now, it's really interesting.

The 2nd time we went on a slow Sunday and both got Bad Luck Burgers b/c they were that good. I hope they extend their menu soon and continue to improve their service.
===================
Posted by Mary E. Brickthrower at 9:47 PM No comments: 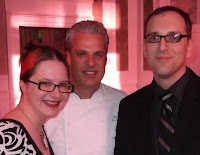 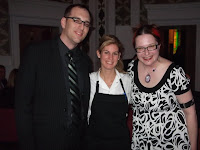 Posted by Mary E. Brickthrower at 2:06 PM No comments: