I recently caught up with one of my favorite Canadian based artists, Attila Adorjany and asked him to catch me up on his latest projects:

Attila: I think the number 1 thing is the webcomic. Some of my other comic stuff was on Nu

mb3rs is that note worthy? I'm also putting together my first solo gallery show which will include a bunch of paintings and custom toys. I just finished overhauling the 600poundgorilla site and I'm contributing stuff on a weekly schedule including icon sets wallpapers and I'll be putting up a few tutorials over the coming weeks.
Check out his links:
Webcomic :
http://comics.600poundgorilla.com/
Gallery/blog/shop:
http://www.600poundgorilla.com/

Mary E Brickthrower [MEB]: First Len, a little role play-- you're standing at the convention table, shiny new copies of LOVE BUZZ stacked neatly in front of you. The clock turns, the doors open. Your very first customer walks by the table-- you have 40 words or less, three sentences and even less seconds to hook them-- what is LOVE BUZZ all about? 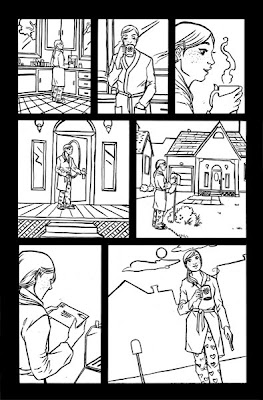 Len N Wallace [LNW]: Normally, I hate having to summarize this particular book in such a short amount of space. The story summary in our pitch itself was something like three pages, which from what I'm told, is heresy for publishers to look at anything over one page. How we actually got this far sometimes strikes me as amazing, but I guess it also speaks volumes to how much Oni digs the book, so apparently I've done something right... And with that, I think I've blown my 40 word wad and maybe then some, so I'm just gonna call for a Mulligan and start over.

Love Buzz is a story about Norm and Maggie, a pair of kids who meet up towards the end of high school, date for a while, break up, then end up getting back together... Several times over through the rest of high school and beyond.

Oni has a great little write-up on their website (http://onipress.com/display.php?type=bk&id=378) that does my overblown wordiness a little bit better justice.

LNW: Love Buzz has been an overall epic test of patience on the parts of everyone involved. We've been picked up, then dropped by three different publishers, either by circumstances beyond any specific parties control, or getting contracts we weren't too keen on. It's been a damn crazy ride, to say the least, but having it this close to done is absolutely worth every single time we've had to fight and scrape, and claw our way up. That and Oni's treating us pretty damn good.

LNN: Michelle has been nothing short of the most kick-ass collaborator I could have hoped for on a first project. I really, sincerely believe that she's going to blow up so huge when all is said and done with this book. She's been drawing her own comics for a long time before she and I got involved with each other on Love Buzz. Her webcomic, Once Upon A Time (http://onceuponatime.comicgenesis.com/) was how I first found and fell in love with her work, and after my original artist had to quit for personal reasons, I immediately started barraging Michelle with emails until she finally broke down and said yes. Ever since, it's be

en a pretty great ride. Every day I recieve a new batch of pages from Michelle is always a huge treat. Her work is amazing and I'm so glad I decided against drawing the book myself. That would have been an absolute fucking disaster!

I'd also like to take a little time to show some appreciation for one of Love Buzz's great background players, Dave Tuney, who provides around 30 pages of art throughout the book, including a couple great jam pages with Michelle. When I got Dave onboard, I had a pretty specific idea of what his role would be. Since I made Norm an aspiring comic artist, I wanted to have him draw a few sequences of his own throughout the book, so instead of asking Michelle to invent a second style for Norm's comics to be drawn in, I went with Dave, whose style is very different from Michelle's, while still being complementary to her work at the same time. Here's one particular Dave page I'm currently in love with...

LNW: As much as breaking down the barrier into this industry takes skill and talent, it also takes a lot of patience and tenacity and an ungodly level of stubbornness. With this game, you're going to have set backs. You're going to have instances that will slap the living shit out of you, and you can either give in and quit, or you can take the sucky situation, take a little time off to recover, and then get up and learn from it. The point is to just be too stubborn to say 'die'.

LNW: Without going into specific spoilers, here's a list of subject matters that my next five projects have one thing or another to do with. (Excluding the romance anthology which I'm starting back to work on editing, once Love Buzz is finally finished.) Transgenderism, detectives, the American Old West, the porn industry, talking brain tumors, and possibly one of the most spectacular death scenes in all of fiction.
LNW: Although I believe the pre-order deadline for comic shops was today, since it's a graphic novel, it should be relatively easy to order again, if you can't find it after it ends up coming out. The book's Diamond order code is MAR094378 and the cut-off date for pre-orders is April 7th, so reserve your copy today. ISBN number is 978-1-934964-21-7. Other than that, it's also available for pre-order on Amazon, but I think they'll be shipping their copies about a month after the book's already hit stores.

HERE'S WHERE YOU CAN FIND LEN ON THE WBZ!!1
http://twitter.com/lennwallace
Http://wallaceswastedspace.blogspot.com