I hope you all are ready for SECRET PROJECT

Posted by Mary E. Brickthrower at 12:10 AM No comments:

The hype was undeniably hard to ignore. First the City Paper, then The Philadelphia Inquirer and finally Philadelphia Weekly all begged me to go. How could I not read the glowing reviews of HAUNTED POE, the interactive theater experience by Brat Productions and not buy tickets for myself and 3 of my friends? I was worried that this haunted house was not going to live up to all the positive press and I would be horribly disappointed. But the truth is this: HAUNTED POE was amazing!

Our 1st experience with the show begged for repeat viewings. I joined the text message discount service that tipp 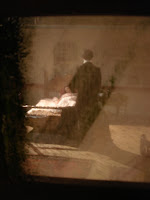 ed me off to special tickets available and this past Sunday I was greatly rewarded with the chance to take a backstage tour after the final performance on Nov 1st. I bought 4 tickets with the idea that we could find SOMEONE that would want to go with us…and sure enough my dear friends Brian and Laura attended HAUNTED POE for the final available 9:30 viewing.

Located in the commercial area between Snyder and Oregon which was surely once an industrial warehouse-haven, you approach HAUNTED POE and find yourself almost taken aback by the desolation despite being amidst the city. Sparsely decorated stairs followed by a hallway bring you into the grand parlor. Check yourself in and let the fear begin to grow as you wait in line for your turn to be ushered into the chambers. The line has it’s own form of entertainment; windows line the walls that allow you to peer into the 1 bedroom apt of Edgar, his wife Virginia and Virginia’s mother (Edgar’s aunt) Maria. Virginia does not look well, she coughs up blood as Poe busies himself with writing and Maria entertains Virginia with piano, reading, and song. This voyeuristic view into Poe’s life turns out to play a central role in the larger experience and draws reality to all the haunted chambers to come.

From the line we entered the Puppet show, a recreation of Poe's most notable events (albeit some liberties were taken with the time line) gives the viewer a poignant overview of Poe's tumultuous life. But do not get the w 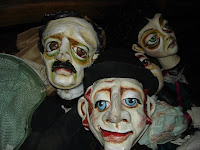 rong idea as this puppet show is not for children and ends with the death of many...including the puppeteer.

A Hall of Mirrors (a reference to Poe's WILLIAM WILSON) is the next chamber and while the concept lends itself strongly to the "Haunted House" ideal I found myself the least impressed with this room. The layout of the room stifled the sound with in, but sound from the other chambers somehow carried in a bit too much so hearing our guide was rather difficult.

From the Hall of Mirrors we follow a beckoning woman into a Cellar and truthfully this is where I began to fully experience the wonderment of HAUNTED POE. For here my favorite Poe tale, THE BLACK CAT, is recreated right before my very eyes, in truth only a few steps from my face. The first person narrative of this story lends itself perfectly to the actor's monologue (delivered beautifully and drunkenly by Bruce Graham) as does the scare of a hanged black cat and a bludgeoned wife. A haunting song rings through the air and we are led by music to the next chamber. 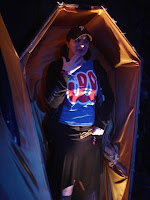 The Graveyard is green, ominous with fog and upright coffins, and soon to be filled with amazingly-voiced women performing an Operetta which will represent 4 tales named after the female that is represented in each story. These stories as you can imagine, do not end happily. The singing combined with a single violin is entrancing, while Morella's story provides the most amount of exposition in this scene. During our tour I was able to step into the coffin that Morella enters, which was only a bit terrifying as it has a hole in the bottom I could fall through at any moment. I was very careful to stand still while taking pictures.

The Crypt is next and offers a typical haunted house scare. A small dark room, 2 statues where your central focus is of course drawn to the statue...that isn't bloody real! Ha... my hairs stood on end when the Pallas Athena came to life and draw us solmenly into the Library.

The Library is a seemingly vacant room literally LINED with books, they cover the walls like wallpaper and 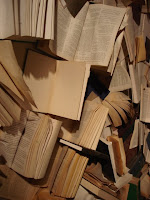 are stacked up on the desk. With a start, Poe appears in the room (actually a simple mirror trick on the floor of the desk) and launches into THE RAVEN. Both this room and the actor (Nathan Holt of a great little hip-hop group called ROWAN AND HASTINGS) are one of my fave's of the show. Poe is manic and totally engaging. Pallas Athena opens a high door from the crypt and plays the part of the Raven as well. Again I must reiterate the enjoyment of being amidst the acting; both the content and the superb talent propels the viewer into the heart of the story.

Now we followed a jester into a Ballroom and into the story of THE MASQUE OF THE RED DEATH. The party-goers include dancers and magicians in addition to the viewers. Prince Prospero is indeed happy to have such a crowd in his Mansion to avoid the plague that is ravaging his country. But you can't hide from death, but it can hide from you. The illusion known as "Pepper's Ghost" plays a key role in this scene as does a tall scary dude in a mask!

Here we are led into a Hallway. Many things are going on in this section of the show. Both a quote from THE PIT AND THE PENDULUM as well as a cryptogram likened to THE GOLD BUG are scrawled upon the 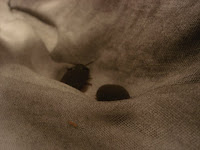 walls. Vermin is present, also a reference to PIT…and then we come to the cockroaches. Brat Productions touted that 1500 cockroaches had been specially bred to take part of HAUNTED POE. Unfortunately it was soon found to be more of a hindrance than a help in the scares as the bugs continued to find their way out of their enclosure. Brat was forced to fog them out…some of the carcasses remained in the show. And the loudest scream I could muster was issued in the Hallway as a man we thought to be part of our group is suddenly overcome with the shakes and open his jacket to reveal a covering of cockroaches upon his shirt as he runs towards the group! A great moment in haunted house antics to be sure. I was left on edge the rest of the show although this was most certainly the height of scares to be sure…or is it? Also in the Hallway we are able to revisit another angle of the scene set in the Parlor, Poe’s house with Virginia and Maria. The “quiet” of Poe’s life is a great juxtaposition of the terror we are experiencing by being immersed in his fictional world.

“The thousand injuries of Forturnato” is avenged by Montresor in the next chamber – a Room in the Catacombs of the Montresor Estate. The Fortunato of this story is reminiscent of the Jester in the Ballroom of The Masque of the Red Death and I did think they were the same person until I researched the cast of HAUNTED POE. This air of confusion permeates this entire scene for me, I have walked twice through the HAUNTED POE house as it was being performed plus once through on a tour and I still couldn’t tell you exactly what took place in this chamber…to me and my memory it seems an extension of the Hallway so therein my confusion may lie. I may have received such a tremendous cockroach startle that I was not fully aware of my surroundings directly after.

A Manor Wall is next and represents another popular Poe tale, THE TELL-TALE HEART. The exposition is told using technology not previously seen in this haunted theater: video of prerecorded scene is acted out as the viewer watches through glass in the wall. While I enjoyed the scene immensely, I was also taken out of the interactive part that I so previously enjoyed. To think of HAUNTED POE as not only a haunted experience but also a journey through Poe’s life and times – the introduction of “moving pictures” simply continues that story. 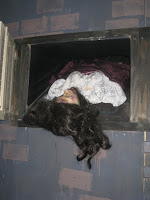 A pounding on a door leads us to an Alley and a Street in Paris or Philadelphia. This chamber references both THE FALL OF HOUSE OF USHER as well as MURDERS IN THE RUE MORGUE. A female narrator stands outside of a house and delivers a frenzied performance then heads indoors where the viewer will both hears a terrific beast as well as sees the damage it delivers with the house shaking and shutters shuddering. All at once these senses cease and our female narrator comes out hurling out of the house, dead. A sad ending to this scene…but perhaps a bit foreboding.

The last chamber is a Train Car and is the climax of HAUNTED POE. We enter a train car and either take a seat or stand and peer out the window where we watch the scenery go by. Music, sound effects of the train and visual representations of every previous chamber are swept past us on the large projection screen. A male narrator provides a voice over, a conclusion, a man afraid of both death and the recollections of his past – his demons. Behind the viewer is the Poe apartment, once again we can see the scene that we have visited upon before. The images and the train seem to speed up, the appearance of a runaway train becomes a rather real fear. It as if we are about to go off the tracks…and then from behind us Poe bursts through a hidden door and dies at our feet! We are left to leave the train at our own volition while Poe must remain.

HAUNTED POE is both theater and a Halloween mainstay – the haunted house. But the combination of both is done s 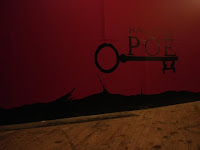 o artfully, so epically that it surpasses any idea you might have of either medium. If you are looking for something out of the ordinary to celebrate this spooky holiday then HAUNTED POE is your answer. BRAT has rumored to continue HAUNTED POE next year with a new experience but I still hope to see some of these same scenes that worked so well and beg for repeat viewings. You will do good to mark your calendar now…and anticipate a great homage to a Philadelphia legend.

Be sure to check out the web site for HAUNTED POE – http://www.hauntedpoe.com