Brian Ewing Art Show in LA - check it out if yer local!

A solo show of Brian Ewing's past and present rock posters.

Atticus and Jedidiah along with the awesome folks Punk Rock Social... are sponsoring an art show for me in LA. I'm usually way too busy trying to not miss a deadline and avoid the sun to have time to exhibit my work.

There are going to be some bands - like FINCH, THE SECRET HANDSHAKE, HALOS and some dude from HELMET will be playing the show.

The $10 goes to pay the bands. I'm offering $5 off, on any posters/ prints to help offset the admission fee. So when I decided to catch up with my pal and inker John Livesay - he laid some knowledge on me:
"I will be at the NEW YORK COMIC CON this year, went last year and plan to be back and signing copies of LEGION OF SUPER-HEROES"

And gave me some awesome scans from the upcoming issues to peruse:

To see the rest, CLICK RIGHT HERE!!!!
============
So when my darling friend Loretta advised me that she would be moving to Florida I was both excited and sad. Excited b/c she is moving to finish her degree and live with her very awesome brother; sad b/c I’m losing my favorite person in the whole wide world besides from my dear Goddard Bunny.

Loretta and I were brainstorming for ways to raise some extra cash for her move and we decided to have a going-away / fundraiser party. The theme? Why our favorite American sit-com, ARRESTED DEVELOPMENT of course. As soon as the theme was decided, we started piecing together the details.

In Arrested Development, the Bluth family holds a “TBA CHARITY GALA” – because they couldn’t decide what they should raise money for. Our TBA would be the “TAMPA BAY ACTION,” a semi-formal dress up affair to help raise some extra cash for Loretta. We ordered a keg of PBR and are charging a measly $5 to drink and eat all you can. The food will be “upscale chic”: stuffed mushroom caps, crudités with assorted dips, bruschetta, CORN BALLS (from the infamous episode of AD where they reveal that George Sr. attempted to market a deep fryer for aforementioned corn muffins, THE CORN BALLER). Dressing as your favorite AD character or semi-formal is encouraged.
Prizes will be awarded in the following:
- Pin the mustache on Private Eye Gene Parmasean
- The Hot Cops dance competition
- Best Chicken Dance
- Best costume

We ordered special prizes off of http://www.cafepress.com/ including buttons, shirts and magnets that have sayings from Arrested Development. I think I’m going to make miniature hotdogs. =) Start your Arrested Development party planning today! And if you’re in the Philly area then come to my party!!!
=======

I saw some fun movies the past few weeks. NO COUNTRY FOR OLD MEN was by far the best. I cried at the end which is no major feat but is rare for a Coen Bros. film. I didn’t particularly like the foreign film SWEET MOVIE even if it did have full frontal nudity and scatological insanity. I think the message had something to do with Communism. But I could be wrong.
=======

Never underestimate your power to hurt yourself doing the most random things. I was playing RAMPAGE for PS2 – a remake of the arcade classic – and played so long and in a weird position as to spasm my back and the middle of my torso. It required a doctor’s visit and I felt rather old. To think: injuring myself on a video game that doesn’t even require physical exertion, just a lot of button mashing. But I learned something more as well – the drugs work. Flexaril is a buddhasend. Long live muscle relaxers.
=====
~Till Next Time Kittlings.
Posted by Mary E. Brickthrower at 2:11 PM No comments:

So it's been a crazy month of March for your fair Brickthrower. I have succeeded in obtaining a bit of a promotion within my "day job" office environ and starting March 24th I will be working full time in NYC.

And no, Goddard and I do not plan to move to NYC just yet.

============
So I think it was perhaps Goddard's friend/co-worker/awesome chick Danielle that put the boy on a Takeshi Miike kick. I couldn't mind; I've been a worshipper of the altar of ASIAN CULT FILM since my first jaunt with JU-ON THE GRUDGE that fateful night at pal Jaime Irate's humble abode.

While we have a few more films to go I would like to propose some quick little tidbits about the films we have seen so far: QUICK MIIKE REVIEWS:
AUDITION - awesome. Brutally graphic. The way she says "deeper deeper deeper" in Japanese is TEH sex. A man gets set up on a blind date that he will never be able to forget. The use of wire in th 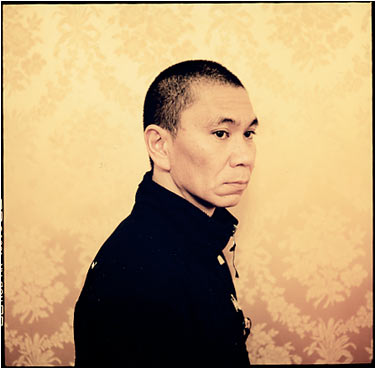 is film is enough to make any man cringe. And proclaimed by comic book/

HAPPINESS OF THE KATAKURIS - a musical, and f'ing brilliant in that CANNIBAL THE MUSICAL sort of way. I lurved it. A family renovates a "guest house" (read: bed and breakfast) named "White Lovers Guest House" or something equally weird. They then find their pleasant inn attracts the most unpleasant kinds of circumstances. The songs break out at the most inappropriate times and that is the beauty of this film.

VISITOR Q - so fucking strange. But so very intriguing and interesting. Goddard relates to me that this film was made as a semi-promotional item for digital cameras. I can't imagine anyone in Japan showing this film at a Electronics Expo or something. Incest, umbrellas, and bullies are highlighted in this flick. I wasn't dull for one moment.

IZO - Eh - I didn't like this one very much. The plot was connected in a rather hapless sort of way.

ICHII THE KILLER - This is one of the first of the "Asian Cult" films I ever saw, courtesy of my horror mentor Thee Irate One, and I still hold it dear to this day. Ultraviolence, Yakuza, awesome. Masochists and suspension artists alike will surely dig on this movie.
===============

So Trent Reznor as NINE INCH NAILS went back into the studio and quietly released GHOSTS, a 2 CD set full of instrumentals. A rather telling title, this album is marked by its haunting feeling, as if you have heard these songs hacked up into bits and pieces and sampled on some other NIN project. My first impression was the similarity between this and APHEX TWIN’s 26 MIXES FOR CASH - an easy concept to put together and g 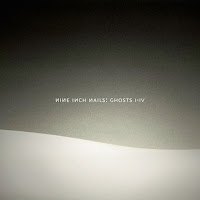 et out for the fans to purchase. NIN offered many options for buying this - from the free download of the first 9 songs, to the $5 download onto your computer, and upwards into limited edition sets and whatnot. I opted for the $5 download. I am happy to say that in some way, shape or form I have purchased the last 5 albums and multiple singles instead of resorting to my usual methods of music saturation.

I do not find this album very entertaining, just as I skip over the instrumentals on THE FRAGILE. I find the combination of Reznor’s industrial/piano/loud/soft electronic sound and his angst-ridden lyrics a perfect match. To lose the lyrics is to lose half of my attention. This is not a bad album. It is a great background CD as my ’married boyfriend’ Matt said; while you’re working or busy putting together IKEA furniture or something then this is a great album to pop in. Just don’t expect some deep revelation in this album, although maybe we can credit Reznor’s recent prolific output to his new-found sobriety. Props for that.
==============

If we wish hard enough, Goddard may put together some "one sentence reviews" on his most recent comic book reads. You can wish...can’t you?

~Till Next Time Kittlings.
Posted by Mary E. Brickthrower at 8:02 PM No comments: